I wrote several blogs about supplements, herbs, and natural remedies that I take or experiment with. I am interesting in slowing down aging and want to live a long, fulfilling life devoid of illnesses, diseases, and health problems. The blogs are:


Astaxanthin (pronounced 'asta-ZAN-thin') is a carotenoid that gives carrots their orange color and is similar to beta-carotene, lutein, and canthaxanthin. Astaxanthin differs from the other antioxidants and possesses unique properties.


Sea creatures consuming astaxanthin have naturally bright red skins or pinkish hues such as crabs, crayfish, lobsters, salmon, shrimp, and flamingos. Furthermore, algae, bacteria and fungi can produce it. Some companies manufacture astaxanthin from a marine microalgae, or red algae called Haematococcus pluvialis, which they call the vegetarian astaxanthin. Algae produce astaxanthin to protect against itself from intense sunlight or dry and cold conditions, or an environment lacking nutrients. Consequently, the algae goes dormant until the environment changes again.

We constantly expose ourselves to toxins, pollution, high stress, and poor diets filled with processed foods. Unfortunately, our living style boosts free radicals in our bodies. Free radicals consist of highly unstable oxygen molecules that become electrically charged and wreak havoc on cells and organs throughout our bodies. Regular exposure to free radicals causes inflammation, accelerates aging, spurs cancer growth, leads to heart failure, and causes many other diseases. Moreover, our skin reacts to damage from free radicals quickly and shows the earliest sign of oxidative stress and inflammation.


Some claim astaxanthin is nature's strongest antioxidant. It protects people from high levels of free radicals, including smokers, the overweight, and the obese. It may prevent or slow down the degenerative diseases of getting older and reduces the C-reactive protein (CRP) in the body, a marker of inflammation in the body.


Every cell in our bodies contains mitochondria that provides the cell's energy. Some scientists believe over time, mitochondria stops communicating to the cells and slows their oxygen use. Then people suffer from inflammation, slower metabolism, and wasting muscles. Scientists are not claiming astaxanthin slows down aging, but it appears to influence the same pathways of aging.


The power of astaxanthin shows in our skin health but does not limit itself there. Its unique properties let it permeate into every cell in the body, providing many health benefits, unlike the other antioxidants.

People taking astaxanthin along with other carotenoids can protect their bodies from free radicals and aging that damage DNA, repair ultraviolet radiated cells, and reduce inflammation. Thus, astaxanthin impacts positively every organ and system within the body.

Some athletes utilize astaxanthin to recover from strenuous exercise more quickly. Exercise causes oxidation in the muscles that astaxanthin neutralizes. They claim astaxanthin boosts their stamina and endurance, heightens strength, and provides an energy rush. Consequently, athletes use astaxanthin to enhance athletic performance. For example, salmon contains high concentrations of astaxanthin that allow them to swim 100 miles per day.

Diabetics suffer from high blood sugar levels that can damage organs and cells, and in some cases, cause blindness. By taking astaxanthin, diabetics help protect their cells from the high sugar levels, reducing their risk of kidney disease and blindness.

Astaxanthin unlike other antioxidants, can cross the blood-retinal barrier to protect our eyes. Then astaxanthin accumulates in the retina and protects against free radicals. Thus, astaxanthin helps tissues circulate fluid within the eye (called vascular health) and sharpens vision, reduces irritation and bleary eyes, and prevents eye fatigue and eyestrain.


Age-related macular degeneration leads to the common form of blindness for Americans. Macular refers to spots forming on the retina that clouds people's vision. Astaxanthin appears as one of the best substances to treat and prevent this blindness.

The Heart and Blood Chemistry

Heart disease involves oxidative stress and inflammation. Moreover, elevated levels of calcium in the blood reflect the telltale sign of heart troubles. Thus, astaxanthin can reduce heart disease, lowers the calcium in the blood, and provides benefits to our heart's mitochondrial membranes. Moreover, it raises blood flow and lowers blood pressure. If you are taking high blood pressure medication, then inform your physician that you are taking it.


Astaxanthin influences our blood chemistry positively. For example, people with high cholesterol levels took 6, 12, or 18 mg of astaxanthin daily. After 12 weeks, the group saw their triglycerides decreased significantly while their good HDL cholesterol rose. However, their total cholesterol remained the same. The group taking the 6 and 12 mg witnessed the greatest gains in HDL cholesterol while their bad LDL cholesterol fell. Thus, the bad cholesterol cannot build up deposits in the arteries and may slow the disease atherosclerosis.

Astaxanthin reduces arthritis pain and protects, mends, and repairs the joints. Some research suggests it can treat and reduce the problems of carpal tunnel syndrome, muscle weakness or injury, and tennis elbow. People suffering from carpal tunnel syndrome have a compressed nerve in the wrist (carpal tunnel), causing pain, discomfort, and weakness in the hands and fingers with sensations of tingling, burning or numbness. Individuals with tennis elbow experience painful inflammation of the tendon in their elbow resulting from overusing the lower arm muscles and twisting the hand.


Rheumatoid arthritis is usually associated with widespread inflammation. When people took 4 mg of astaxanthin daily, they felt an 85% improvement in their pain and raised their mobility by 60%. Furthermore, they claim the astaxanthin supplement was as effective as their prescription drugs.

Astaxanthin protects the skin's outermost layer against oxidative stress. Astaxanthin can enhance immunity, squash free radicals, and suppress inflammation, which reduces the skin's puffiness and irritation. Consequently, astaxanthin becomes one of the best supplements to repair and heal our skin from the inside. It reverses years of damage quickly, protects future skin damage, and maintains a youthful appearance. It reduces wrinkles and signs of skin aging better than any cream, lotion, or spa treatment could ever do.


Astaxanthin can encourage hair growth and deepens the skin's pigmentation. People taking astaxanthin radiate a healthy tan glow, and unlike the sickly orange color by consuming too many carrots.


Ultraviolet radiation produces free radicals that damage skin cells leading to sunburn or inflaming the skin. Consequently, astaxanthin can neutralize the free radicals because it is a potent antioxidant. Thus, astaxanthin acts like an internal sunscreen. However, unlike topical sunblock, astaxanthin does not block UV rays, so it does not stop the ultraviolet radiation from producing vitamin D in your skin. Some claimed the sun could no longer burn them by taking 4 mg daily for at least two weeks.


People need to check themselves gradually to see if astaxanthin will protect them from the sun. Some people thought they were protected from the sun and received the nastiest sunburn by staying out in the sun all day.

Since astaxanthin is a potent antioxidant and reduces inflammation, people using astaxanthin have reported the following benefits. 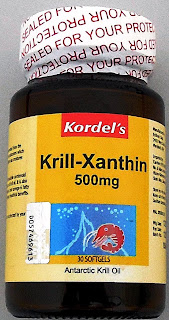 As an added bonus, krill contains the Omega 3 fatty acids, docosahexaenoic acid (DHA) and eicosapentaenoic acid (EPA). Therefore, I substituted krill oil for my fish oil tablets. Krill from cold oceans also posses higher levels DHA and EPA. One researcher believes our bodies can absorb EPA and DHA from krill oil better than fish oil. Although krill oil contains less DHA and EPA per tablet than fish oil, our blood can have comparable levels of DHA and EPA because our digestive system absorbs krill oil better.


Researchers have discovered the following:

People will not experience any miracles overnight. They must take astaxanthin from two weeks to one month to see and feel the benefits. Consequently, our bodies must accumulate and build up astaxanthin levels over time from daily consumption. People can buy astaxanthin from many websites, health food stores, and pharmacies. Some recommend people start with 2 mg per day and gradually work up to 4 mg per day. Athletes or people suffering from chronic inflammation should take 4 mg or more daily. Some recommend between 8 and 12 mg daily to enhance athletic performance or improve heart health.


Some researchers claim users need at least 4 milligrams per day to feel health benefits. However, I sense a difference by taking two Krill oil tablets daily with 0.75 mg of astaxanthin per tablet. My chronic pain in the ankles went away, my sunburns heal quickly, and my skin looks good. My continual eyestrain has disappeared. I even reduced my dosage of hyaluronic acid to 200 mg per day.


A person could eat from four to six ounces of wild, Pacific salmon every day to gain between 2 and 3 mg of astaxanthin. Not only would this be hard for people to do, but some dieticians and doctors recommend people should limit their intake of fish because fish accumulate harmful pollutants and toxic metals in their bodies.


People should avoid eating farm-raised salmon because it contains low levels of natural astaxanthin and could be dangerous to your health. Not only does the salmon contain low levels of the healthy Omega 3 fatty acids, docosahexaenoic acid (DHA) and eicosapentaenoic acid (EPA), the breeders feed the farm salmon synthetic astaxanthin, produced from petrochemicals. The U.S. Food and Drug Administration has restricted synthetic astaxanthin to animal feed and has not approved it for human consumption while the European Commission has labeled astaxanthin a food dye.


Since astaxanthin is fat-soluble, you should consume a little fat before taking it. Otherwise, your body may not absorb it well. Many good fats include butter, coconut oil, or eggs. Furthermore, you should take astaxanthin with other carotenoids such as beta-carotene, lycopene, alpha-carotene, lutein, and zeaxanthin. We find zeaxanthin, a yellow carotenoid, in yellow Indian corn. Some dieticians recommend people get their antioxidants from brightly colored fruits and vegetables because they provide more nutrition than supplements.


Researchers have not reported any toxicity or side effects from astaxanthin supplements, but you should check with your doctor before taking any supplements. Pregnant or nursing women should not take astaxanthin because scientists and researchers do not know how it influences the fetus or child.


If you worry about the potential toxicity, astaxanthin cannot turn into a pro-oxidant at high levels and damage the body, such as Vitamin A. Some people have taken between 50 and 75 milligrams daily with no harmful effects. However, humans would rarely consume above 4 mg per day in their natural diets. Thus, users should side with caution and not take too much until we know the complete effects.

PS: I found an excellent book on Astaxanthin. You can download it as a pdf file.

Ken Szulczyk
I was born in a small Michigan town filled with the hum and noise of factories. As I was growing up, I saw the factories close and become silent. Then hard economic times had followed. I escaped the town and enrolled into the university. Eventually, my education opened the door to the United States, and I graduated with a Ph.D. from Texas A&M University. I studied environmental and natural economics. Then I used my education as a ticket to see the world.