People must be careful when dealing with companies on the internet. For example, I purchased two bus tickets to visit the Grand Canyon South Rim on 24 December 2016. The company, Canyon Tours, clearly stated the company would pick up guests at their hotel. I found no disclaimers that restricted the range of hotels in the Las Vega area. I stayed at Sunset Station in Henderson, Nevada, which is 16 miles south of the Las Vegas Strip. I did not think the hotel would be a problem because the bus would travel near Hoover Dam, so the bus would drive through Henderson, Nevada. Henderson lies between Las Vegas and Hoover Dam. The company charged my debit card and informed me the bus would pick me up at the Excalibur Hotel. The company never asked whether I was ok with this. Unfortunately, Canyon Tours provides misleading information on their website because they did not honor their pledge to pick me up at my hotel. Please refer to their information on the website. 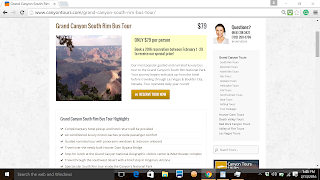 Once a company gets your credit or debit card information, they can charge any amount on it. I bought two tickets for $79, but the company charged my debit card $168. I should have immediately called and contested the charges. Canyon Tours never explained why it charged me an extra ten dollars.


A clue that this company would be a problem is Canyon Tours does not provide a mailing address on their website. The company supplies two phone numbers and an email address. It is not suspicious if a company does not provide an address, but an address provides two things. First, an address gives a person a means to send official complaint notices, especially if you are planning to sue or write a formal complaint to a government agency. Second, the address allows people to trace other businesses to that address. Some badly operated businesses change their name frequently, especially once the public has discovered its reputations, but these companies may operate in the location.


Depending on the complaint’s severity, customers should also report bad businesses to the government agencies such as a State’s Attorney General’s Office, Federal Trade Commission, and other agencies. If the company had done something illegal, then report the company to law enforcement. If the company did something unethical but still legal, then complaining to the government agencies may do little good. However, posting your complaint on social media can be effective to inform future potential customers


Many social media and websites allow customers to post favorable or unfavorable reviews of companies. Some people routinely check reviews on TripAdvisor, RipoffReport.com, Yelp. com, and Complaints.com before trying new business. I found this information at TripAdvisor on 13 February 2016 about Canyon Tours. The over rating is okay because the 319 excellent ratings are three times more than the 86 terrible ratings. Nevertheless, people should be careful reading online reviews and complaints. Some companies routinely challenge bad reviews and coerce websites to remove the unfavorable content. Furthermore, a company’s competitor may post bad reviews to attract more customers. Thus, an online rating may not match a company’s true rating. (I will monitor my reviews to see if Tripadvisor and Yelp will remove it.) 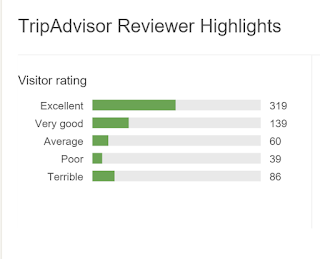 Another trick to identify a bad company is to call the company’s customer service and ask questions. If I had called, I would have discovered Canyon Tours provides poor customer service. Of course, this was a common theme as I perused through some of the terrible ratings - poor customer service. When I called to confirm my pickup time and place, the person answering the phone quickly says please hold on and immediately placed me on hold. I waited, and waited, and waited. I called back to try to speak with the person answering the phone. On the third attempt, I screamed at her, "Hey." She paused and let me speak. Then she still put on hold. Imagine a customer with no troubles experiences just contacts the company and encounters poor customer service. Then imagine how the company would treat a person if this person incurred a problem? My problem was the customer rep told me to be at the hotel at 6:30 A.M. but the bus left at 6:15 A.M.


Companies like Canyon Tours may operate poorly because they try to provide too much service for rock bottom prices, which I call the Wal-Mart Effect. Companies reduce prices as much as possible to attract customers, and, thus, they must cut corners to earn a profit. Canyon Tours probably offers too many services with a limited staff. For example, I used their phone number to search for more information. For the phone number, 866-218-3427, Maverick Helicopters came up on Google. For the phone number, 702-260-0796, Canyon Tours came up. Another company, Scenic Airlines, charged my debit card. When I found the mailing address for Canyon Tours on the internet, an agent for Farmers Insurance also shares the same address. At least three businesses are associated with Canyon Tours.


How could I infer the company could be cutting corners? I hired tour companies in Cambodia, Thailand, Indonesia, and the Philippines. The companies always picked me up at the hotel on time. They were organized. They provided the service that they said they would provide. If a patron were late, the driver would call the front desk of the hotel and find out what the problem was. The companies knew some customers were always late and they built that into the schedule. For Canyon Tours, the company takes the customers’ money – supplying a service becomes secondary.


Bad companies that sell inferior products and offer terrible services will usually bankrupt and close their doors in a market economy. As long as customers have a choice of companies, they will gravitate towards the good ones. However, bad companies can thrive at tourist destinations, especially if the area attracts international tourists. For example, Las Vegas attracts international tourists from around the world, so bad companies have a constant supply of unsuspecting customers to victimize. If I did more research on the internet about Canyon Tours, I would have avoided this company. I should have rented a car and visited the Grand Canyon myself.
Posted by Ken Szulczyk at 2:13 AM 2 comments:

Ken Szulczyk
I was born in a small Michigan town filled with the hum and noise of factories. As I was growing up, I saw the factories close and become silent. Then hard economic times had followed. I escaped the town and enrolled into the university. Eventually, my education opened the door to the United States, and I graduated with a Ph.D. from Texas A&M University. I studied environmental and natural economics. Then I used my education as a ticket to see the world.